Confluence of Art and Science

Guests mingled in anticipation on the third floor of the Brown-Lupton University Union on Monday awaiting the unveiling of Woodrow Blagg’s “The Rescue.” This massive, hyper-realistic drawing masterfully captures a team of TCU students on the Amakhala Game Reserve assisting in rhino procedures performed by South African wildlife vet, Will Fowlds. “The Rescue” was commissioned by TCU Alumnus Larry Brogdon after a trip to South Africa where he had a life-changing rhino experience.

Brogdon says, “I learned about the TCU Rhino Initiative when I got an invite from Mike Slattery to go to South Africa. The first time I encountered a rhino in the wild, it was like a Jurassic Park moment.” But it was a trip to the bank that got the ball rolling for this commission. “Every time I’d go into JP Morgan Chase, I’d stare at Woodrow’s drawing. I really studied the detail. I think I was drawn to it because it’s of the W.T. Waggoner Ranch where I used to go with my grandfather when I was a kid. I asked my friend at the bank if I could meet the artist,” he says.

Blagg vividly remembers getting Brogdon’s call. He decided that to accurately capture the subject for his drawing, he needed to visit South Africa and experience these animals first hand. He says, “I remember being in the field in Africa, and I thought, ‘This looks like West Texas on steroids.’” Slattery recalls Blagg as being transfixed by the up-close animal encounters. “During his 10-day stay at Amakhala, he came out with the students on all procedures, but he also spent some ‘alone’ time with our rangers among the rhino crashes. On the actual procedure, he simply stayed ‘in-the-moment,’ and I think that emotion and connection come across in the drawing,” Slattery says.

Blagg primarily creates large-scale, graphite drawings that reveal the relationship he feels toward his subjects and their landscapes, and his pieces have graced the private collections of former president Ronald Regan and Ralph Lauren. Describing his pieces as “pictorial poetry,” much of Blagg’s work documents life on the remaining working ranches in West Texas.

“The Rescue” was a labor of love. Blagg emphasizes that what you see hanging on the wall never actually existed. “It’s a culmination of many photos I took in South Africa. It was an exhaustive process. I have files for every person in the drawing, with 30-40 pictures in each one. Deciding on the assemblage took seven and a half months. I started looking at artists like Caravaggio and his painting, The Calling of Saint Matthew, for inspiration in the composition. Over time, the drawing took on a life of its own,” Blagg says. After more than two years in the making, Blagg’s piece far exceeded any expectations.

“Woodrow drove the piece down from Pennsylvania because he didn’t trust the airline with it. We met at a framer over in Dallas. When he rolled it out on the table, I couldn’t believe how he had captured the texture of the rhino’s hide. It was as if I was right there over the rhino. I could almost see it breathing,” Brogdon says. Slattery had received small sections of the drawing over time as it progressed, but he says he was overwhelmed when he saw the drawing in its final state. “It feels both grand – it is an expansive picture on a large scale – but it also feels deeply personal. If you look closely at the expressions on the people’s faces, I think you see that emotion. Working with these animals is a very moving and personal experience. They are large and well-armored, yet they are so vulnerable. It is truly a masterpiece,” Slattery says.

TCU’s Rhino Initiative was launched in 2014 by Slattery, director of the Institute for Environmental Studies (IES). Teaming up with Fowlds, IES helps save the rhino and ensures its long-term survival. Standing face to face daily with the bloody horror of rhino poaching, Fowlds conducts life-saving surgery on poached rhinos and is involved in a wide range of conservation initiatives. IES stands ready to help on several fronts, from organizing reduction demand campaigns and raising public awareness, to supporting protection and rescue initiatives on the ground, where poached rhinos can be rehabilitated and eventually function again in wild habitats. As part of the IES Biodiversity and Human Development Study abroad course, TCU students have the opportunity to travel to South Africa and participate in rhino procedures.

Fowlds believes that connecting these young lives to global issues is an important investment into the future. “It promotes understanding, empathy, a deeper sense of responsibility and control over our destinies,” he says. “This piece is a window into my world and now creates a visual portal from a prominent position in the BLUU, connecting TCU campus life with the plight of rhino in the field and those that have chosen to extend their reach to the other side of this planet to help fix a crisis of global significance.”

As a true collaboration between art and environmental science, Slattery hopes that Blagg’s piece will bring further awareness to TCU’s Rhino Initiative. “I think those that see it will realize that the piece captures the mission statement of the university – Horned Frogs, being global citizens and leading from the front. It’s a piece about our commitment to the natural world, and it is a piece that shows people ‘doing’ – actually helping in the fight to save our natural heritage,” he says.

Brogdon has generously loaned “The Rescue” to TCU for an indeterminate period of time. It can be viewed on the third floor of the BLUU. Learn more about the TCU Rhino Initiative. 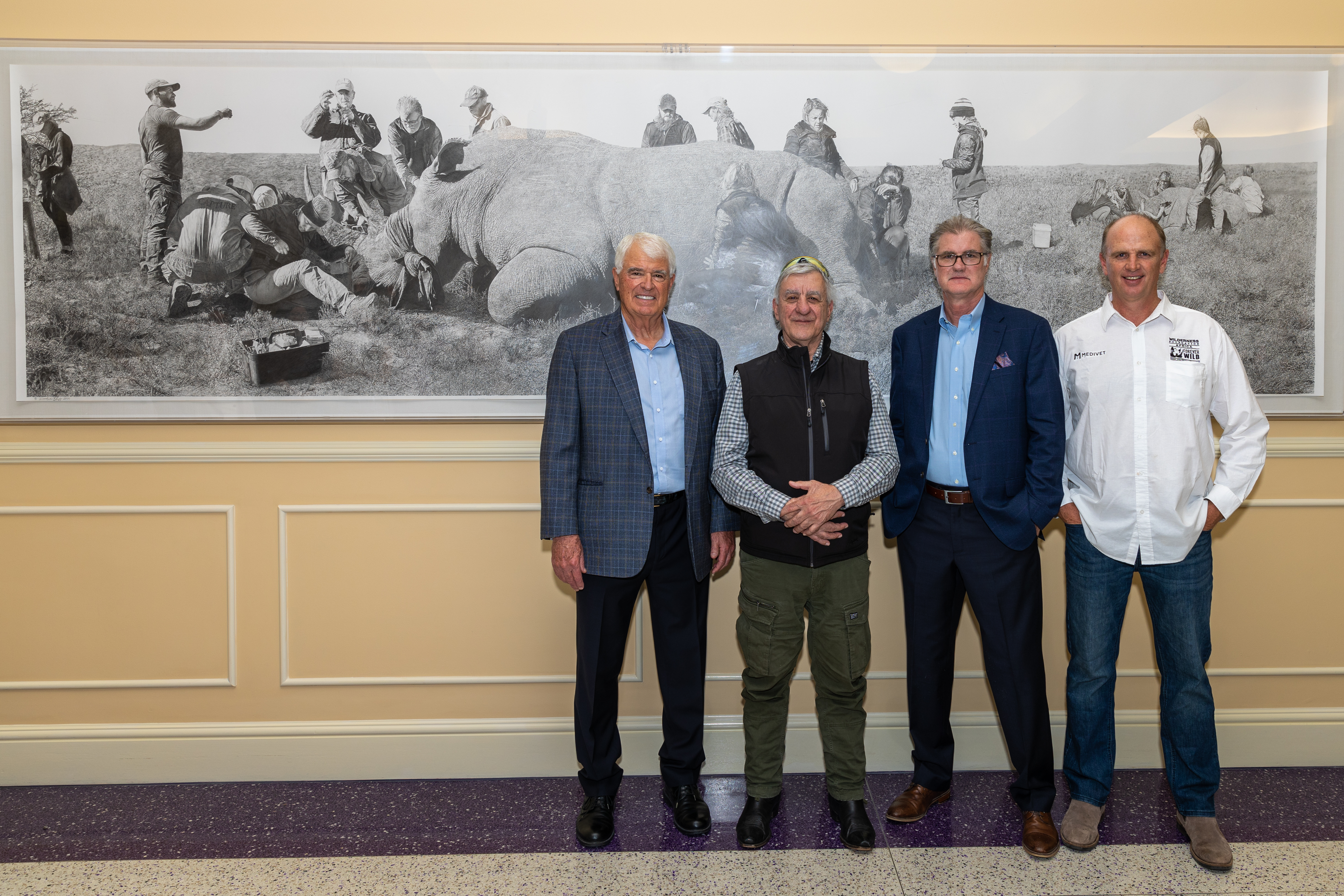