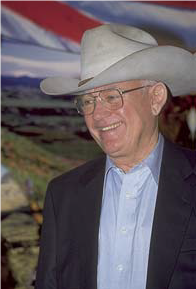 A Celebration of Life for Mr. Merrill will be held on Saturday, May 15, 2021 from 10:00am-12:00pm at the Will Rogers Memorial Center/West Arena (auction arena to the west of the John Justin Arena).

If you do not know John “Chip” Merrill personally, chances are you do know or have benefited from one of the many organizations with which he had been involved.  He served as a director and member of the executive committee of the Texas and Southwestern Cattle Raisers Association (TSCRA).  Mr. Merrill was a past director of the National Cattlemen’s Beef Association (NCBA), and he chaired both the TSCRA and NCBA Research and Education committees, where he led efforts to fund the first national beef consumer survey and to establish the national Integrated Resource Management (IRM) program.  As a founding member of the national Grazing Lands Conservation Initiative (GLCI), he is credited with getting more funding through the U.S. Department of Agriculture (USDA) Natural Resources Conservation Service (NRCS) for grazing programs and technical assistance nationwide.  His other affiliations include the Society for Range Management (SRM), Soil and Water Conservation Society (SWCS), Natural Resources Foundation of Texas (NRFT), Botanical Research Institute of Texas (BRIT), and Texas Wildlife Association (TWA). He was inducted into the State Fair of Texas Heritage Hall of Honor in 1998 and continued as a director and member of the executive committee of the Southwestern Exposition and Livestock Show.  From 1961 to 1996, Mr. Merrill was the Director of the TCU Ranch Management Program.  (information courtesy of Angus Journal http://www.angusjournal.com/articlePDF/conservation.pdf)

Watch this video message from the faculty and staff in Ranch Management.

Acknowledging the contributions to the North American ranching industry, the TCU Ranch Management program has been named the recipient of the 2016 W.A. “Bill” King Award for Excellence in Agriculture by the Fort Worth Farm and Ranch Club. Read the full article.

For the first time, the Botanical Research Institute of Texas (BRIT) is awarding its 2017 International Award of Excellence in Conservation to three groups in the same year. BRIT has announced that the honorees are J. David Bamberger and his ranch Selah, Bamberger Ranch Preserve; Frank Yturria and the Frank Yturria Family Ranch; and the Texas Christian University (TCU) Ranch Management Program. Read full article.